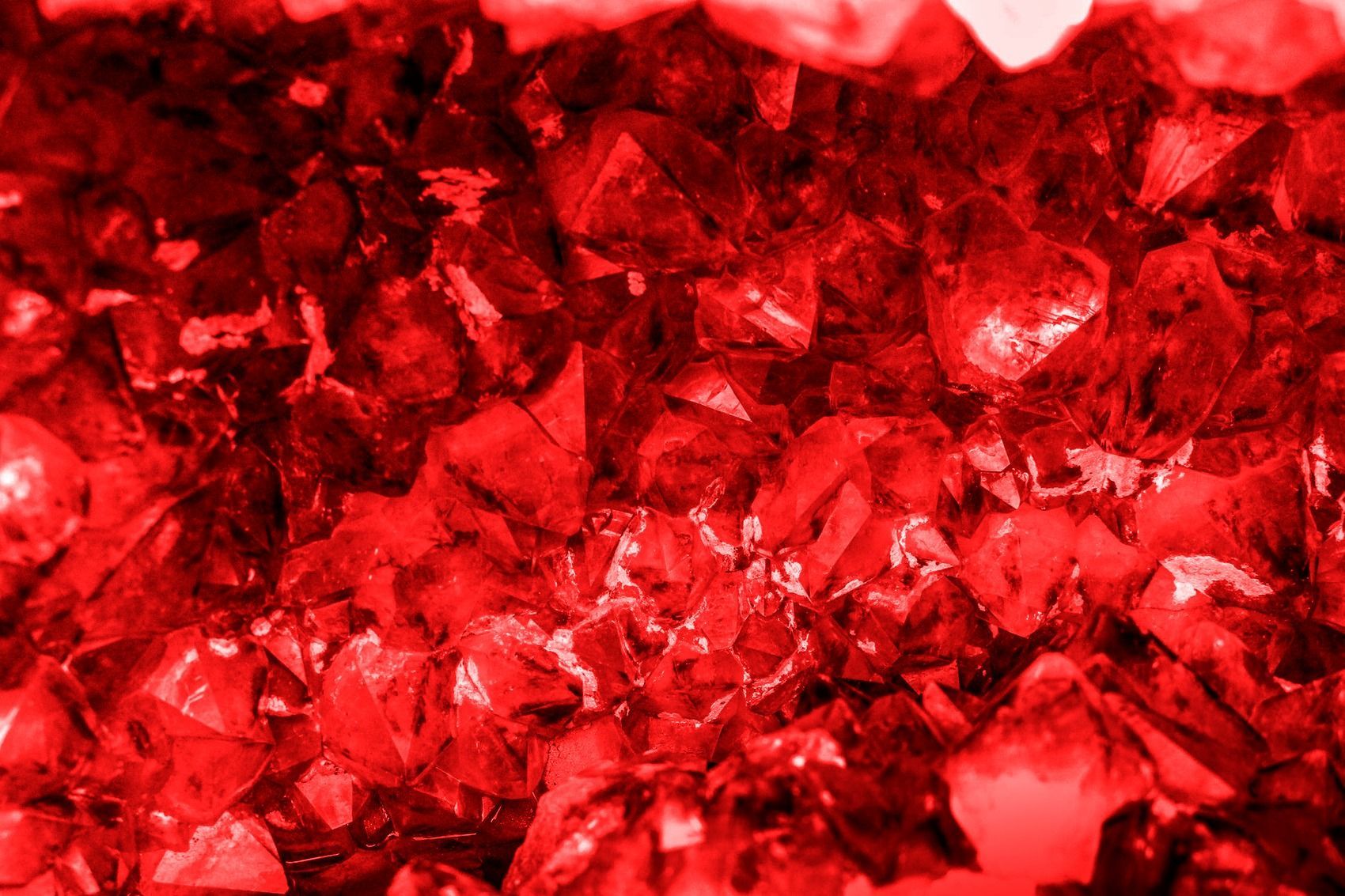 Modules are incredibly flexible and powerful constructs that help you organize your code in a more... modular way. They let you package related functionality in a cohesive unit you can use to extend the behavior of objects and classes.

Ruby gives you two options to bundle behavior into units: classes and modules. Both are very similar in many ways, but have two important differences:

Both classes and modules let you package together related behavior. Classes let you create several objects from them, each one with individual instance variables to hold its state. If you find yourself writing classes without instance variables or methods, you might want to use a module instead.

Consider the case where you need to write a simple linear motion calculator. Because the operations are stateless and simple, you probably won't need to create instances. Let's see what a module with that functionality looks like.

This is an example of how we could use the module to compute some simple cases:

Running this code prints the following:

Modules are very useful for bundling functionality, start using them and you will see great benefits in modularity with very little effort.

Modules are a useful function storage, but their real power is their capacity to give classes new behavior. You can 'mix-in' a module into a class, immediately providing it new capabilities. This powerful mechanism removes the need to use multiple inheritance.

Understanding how it works is much easier with an example. Imagine we need to model 'taggability': an object can receive multiple tags and then print them. We can create a module that does this and then mix it into classes.

To mix-in a module into a class we use the 'Include' keyword. The following class models a very simple post (like a blog article, for example). We make it taggable by including the module as follows:

As you can notice on print_post_summary, we can use the get_all_tags method defined on the module. What's more, we can call on a Post instance the same module methods:

Imagine you need more classes with taggable behavior. Instead of writing the functionality again and again, you can just mix-in the module you already wrote. The following class represents a collection of related quotes. And yes, you guessed it, you also need them to have tags.

Now let's give it a try:

When run, it prints:

As a side note, you can find an awesome nonsense generator based on Deepak Chopra's twitter feed at wisdomofchopra.

Prepend works in a very similar way to include, in the sense it's used to mix-in functionality from a module into a class. The main difference happens when methods in the module and class have the same name.

On the other hand, if you prepend the module, when you call print_description, you will run the method in the module, as prepended modules take precedence over classes. In short, the order of precedence is something like:

Of course, if you take into consideration inheritance it can get a bit more complicated, but just a little bit. The next section will deal with that.

Method lookup in an inheritance chain with modules.

When you send a message to an object, methods will be looked up in the following order:

Let's check an example to understand better how it works.

We have 2 classes and 4 modules, all of them have a method called print_greeting that just prints a greeting message on the console. One class inherits from the other, and the modules are included or prepended in them. I tried to provide names that make it clear where each of them fits, but for getting a better view of it, I made the following diagram. 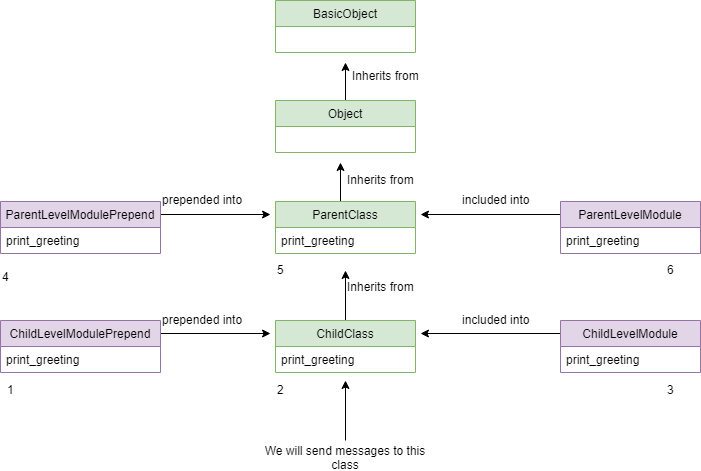 I also include in the diagram the Object and BasicObject classes for completeness.

Try it yourself and experiment a bit

In a ruby file, you will find the following lines, where we instantiate a ChildClass object and send the print_greeting message.

Following the priority list above, you would expect the message printed would be the one on the ChildLevelModulePrepend, run the code to verify this is the case.

Now, if you open the ChildLevelModulePrepend file and remove the definition of print_greeting, the next in the list would be the definition at the ChildClass. Perform the changes and check it follows the priority order.

You can continue testing with the code by removing definitions and seeing which method is called just to get a better feeling on how the method lookup works. Use the numbers under the boxes as a guide, I found this exercise very useful for gaining a better understanding of how method lookup works.

One last usage of modules I didn't want to leave out is when we use them to separate classes into their own namespaces.

Suppose you need to represent the class controller for both a video game console and a control panel. Instead of prefixing the classes with extra words in order to identify them, you can place them in modules for being sure what they represent.

You can define a module for the game console:

And a module for the control panel

After that, when you create objects, you can specify which one you need, even if the classes share the same name:

Using modules as namespaces is especially useful when you are writing your own gems. This way you create a well-defined boundary between the gem and the projects using it.

As you just read, modules can assist you in crafting better quality code in more than one way. I did my best to show you the most common scenarios, and hope you'll find this useful when working on your own projects.

About Juan Orozco Villalobos
Budapest, Hungary
Hey there, I'm Juan. A programmer currently living in Budapest. I believe in well-engineered solutions, clean code and sharing knowledge. Thanks for reading, I hope you find my articles useful!
Previous Post : 4 Unhealthy developer habits and what to do about them   Next Post : RESTful Services: what they are, and what they aren't