In the previous article we learned the basics of replication and why is it useful to learn about it.

We also learned about leader/follower replication. We select a replica to be the leader and clients will only be able to send writes to this replica. After a write is processed by the leader it notifies every follower (the other replicas in the system) about the changes, and they perform updates to their own data.

Replicas will fail sooner or later, and there is little you can do to prevent it. Knowing how replication systems handle the addition of new nodes and how data is recovered is important for understanding what's going on in your system. Let's explore some of the most important ideas behind failure recovery in replication systems.

Adding new followers to the party

The first important topic about recovery is the addition of new replicas. You might want to add new nodes to your system for two main reasons: 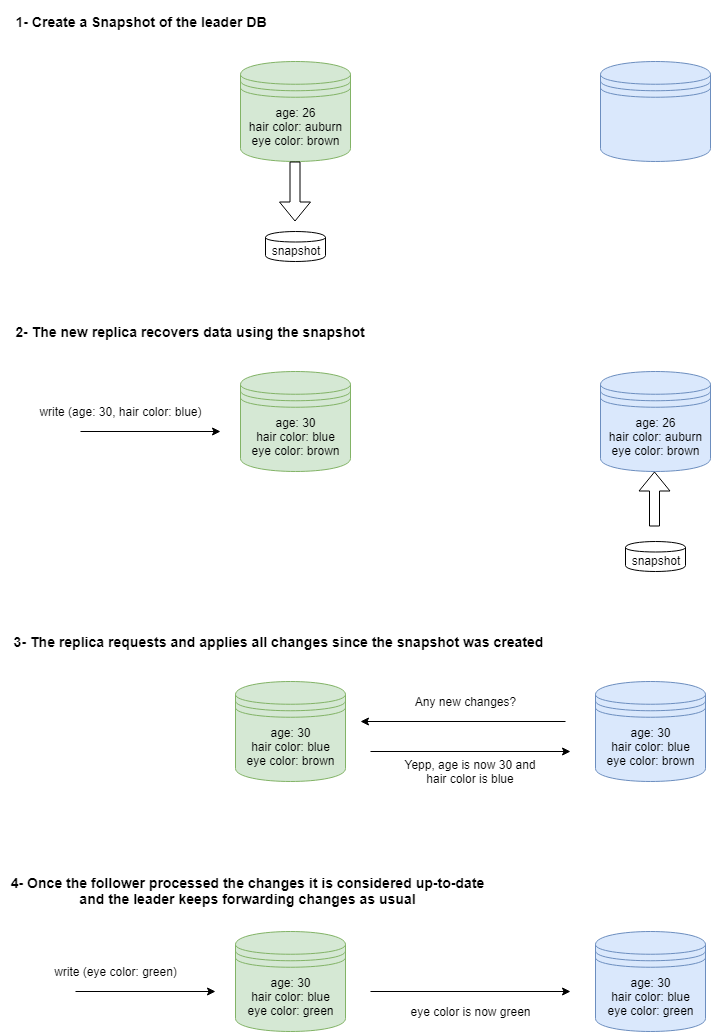 Recovering nodes that were already running

Our system should be able to continue running even if individual nodes fail. There are multiple reasons our nodes might go offline, like crashes or network issues. We might even restart them on purpose to install security updates or other software. The way nodes recover depend on their type, leaders and followers recover using different means.

The recovery process for followers is very straightforward:

Because of the special nature of the leader, recovery is usually more complicated than in the case of followers. We should also be aware of the things that can go wrong with the process. The recovery involves designating a new machine as the leader in a process called failover, that works as follows:

The process seems simple, but many things can go wrong:

We just learned the basic ideas behind system recovery. The recovery process of most implementations follow a similar outline, so you'll be able to understand what's going on when you hear the words recovery and failover in your production systems. In real systems, these processes can be performed manually by a system administrator or happen in a totally automatic fashion.

We've been talking about the replication log for a while without paying much attention to it. The stream of changes from leader to followers plays a very important role in replication. In the next article, we will learn how this works.

It's Fine, No One Can Remember Everything
Glossary for non-programmers who need to deal with programmers.
All the things my CV doesn't tell you about me