In the previous article we learned that neural networks look for the correlation between the inputs and the outputs of a training set. We also learned that based on the pattern, the weights will have an overall tendency to increase or decrease until the network predicts all the values correctly.

Sometimes there is not a clear direction in this up/down tendency and the network will have trouble learning a pattern. In the following example, each weight is pulled up with the same force it's pulled down.

You can make the test by grabbing our implementation of gradient descent and replacing the data setup section with this one:

You can run it and verify it never converges. You could even increase the number of iterations, but it won't help: the network is not able to find a proper correlation between inputs and outputs.

This problem is pretty common, and as you imagined, people already came up with a solution. If the network can't find a clear correlation between inputs and outputs, we can still create an intermediate set that has an actual correlation with the outputs.

This set will be calculated using the inputs. In the world of neural networks, we can do this by creating any number of intermediate layers. 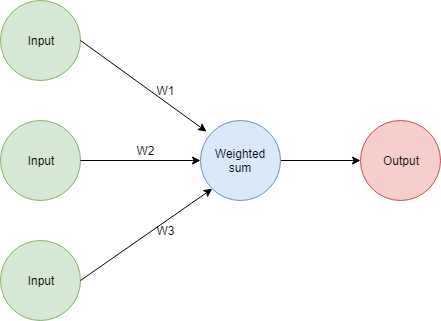 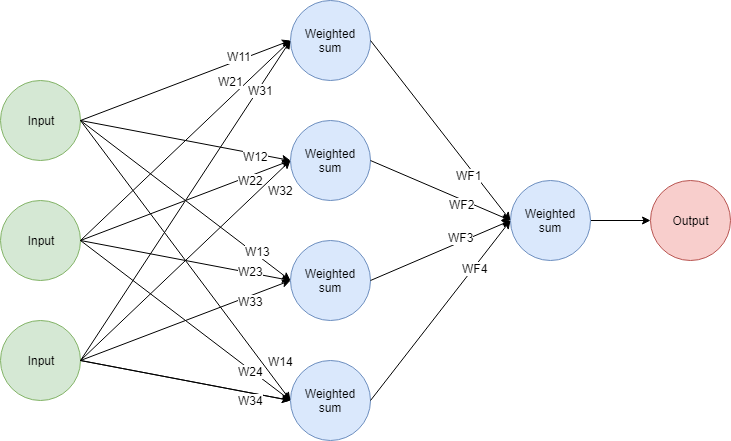 You can see this as two networks stacked together. The outputs of the first part of the network are the inputs for the second part. These additional layers are usually called the hidden layers of the network.

Good, now you understand how the network performs predictions, but how can we adjust the weights? For this, we need to understand a new technique: backpropagation.

Let's remember an important lesson from previous articles: weights are updated based on their contribution to the error in a prediction. Neural networks change the value of their weights in an attempt to reduce their errors.

This is also the reason we multiply by the value of the respective input when calculating the correction factor for a weight. If the input had a value of 0, you can be sure that the weight it was multiplied by did not contribute at all to the overall error in the prediction.

For that, we need to be able to calculate the error contribution of each weight in the network. The trick is in understanding how the new layer and its weights (WF*) contribute to the final error.

Look for at this network with dummy values: 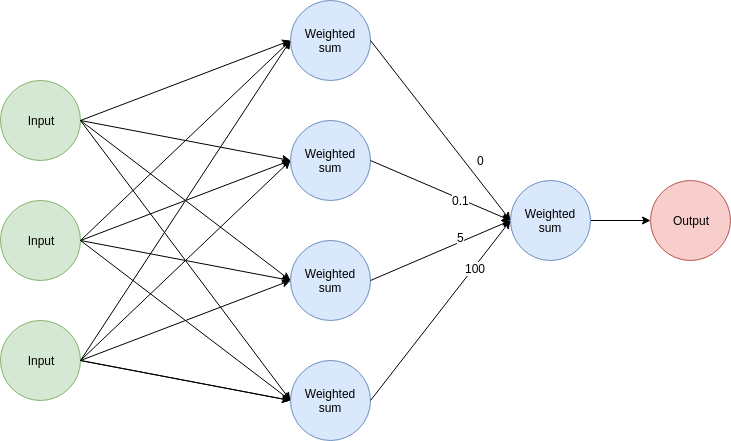 You can make the following assumptions about a prediction:

So, take a step back and see it from this angle: we can use the values of the weights in that layer as a measurement of how much each node contributed to the overall error.

We can use this idea to calculate the correction factors for the previous layers like this:

Again, this is easier to visualize with an image: 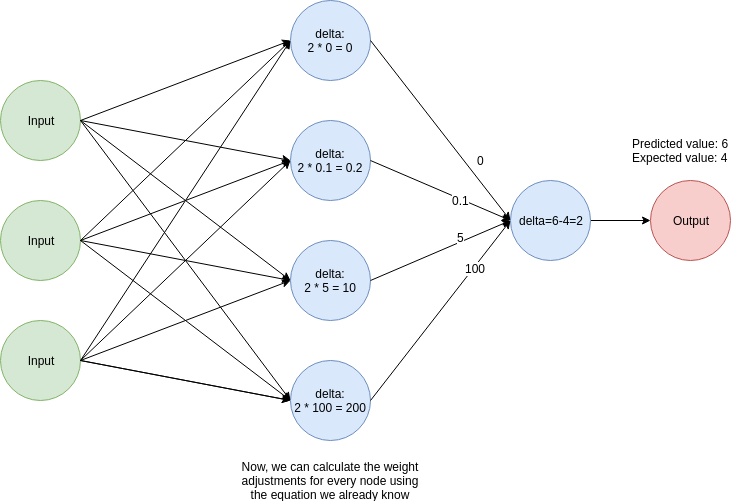 Great! We are almost ready to implement backpropagation in Python. Before writing the complete code, let's have a brief discussion of linearity and activation functions.

Here's the thing: it doesn't matter how many layers you add. If all they are doing is a weighted sum you won't gain anything from adding more layers.

The reason is that the dot product is a linear operation. If you have several layers performing a weighted sum, you can always create a one-layer network with the exact same behavior. As an example, look at the following network:

If you do the math you will find out that the output is given by the expression Output = I1(W1W5+W3W6)+I2(W2W5+W4W6), so you can replace it with this network: 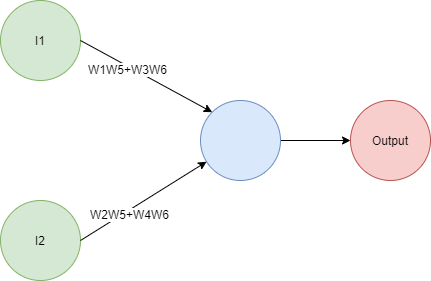 Bigger networks might take a bit more effort to compact by hand due to having a bigger equation, but the same principle applies: no matter how big the network is, you will always be able to replace it with a smaller network.

Remember that originally we wanted to create extra layers to help us build an intermediary representation of our data that has a correlation with the output. What we need is to find a way to bring in some non-linearity into our network to enlarge its hypothesis space. Doing this will help us model much richer behaviors and to create intermediate sets that are not bound to the patterns in the inputs.

For our implementation we will use relu because it's simple and usually yields good results. Given that relu is f(x) we have the following behavior:

In other words, if the output of a node is a number lower than 0 it becomes 0. If it's higher or equal than 0 it forwards the output with no modification.

Now we can use this knowledge to create a complete implementation in Python.

Run the code to verify it converges to a solution with 0 error:

Now we know all the fundamental pieces needed to understand deep learning. The main difference between traditional NNs and modern deep learning architectures is the sheer number of layers.

Until recently training networks with huge numbers of inputs and layers was not possible, but thanks to powerful computers and the ingenuity of computer scientists we can now solve novel problems using this powerful idea.

Deep down, deep-learning architectures build intermediate representations of the inputs that model the presence or absence of particular features. Think of a network tasked with identifying the faces of dogs, such a network will probably have intermediate layers detecting the presence of dog noses, ears, and eyes, among many other features. A final layer takes into consideration all the previous results to emit a verdict.

Thank you for reading!