In the previous article we learned what a neural network is and how it performs predictions: the input is combined with knowledge (in the form of a weight value) to produce an output.

In practice, just one input and one weight are rarely of any use. Most systems in the real world are much more complex, so you will need networks that can handle multiple inputs to solve current technological challenges.

Let's see how can we write a neural network that takes into consideration multiple pieces of data to achieve better estimations.

We can understand the intuition behind most machine learning topics with very little maths, but some concepts make things much easier to understand. For now, we only need two ideas: vectors and the dot product.

A vector is a list of numbers, represented by putting them between square brackets. Simple, right?

All these are vectors:

The size of a vector is the number of elements it has. In the examples above, the vectors are of size 2, 4 and 6 (in descending order).

It's important to remember that two vectors need to be of the same size for this operation to apply. You can't calculate the dot product of [1 2] and [2 3 4].

The dot product is an important thing to know if you want to learn more about machine learning. As an extra exercise, let's write a simple implementation of the dot product in Python:

This small demo helps you verify the above code works as expected:

Good, now that we are done refreshing our linear algebra, let's go back to neural networks.

We will continue working on the code for our neural network. Until now, it told us how many calories we burn after jogging a given amount of time.

Like any good engineer, we kept looking for ways to improve our model: We investigated and discovered that other factors influence how many calories we burn while jogging, like the speed (in m/s) and the runner's mass (in kg).

Neural networks can take into consideration multiple inputs to perform a prediction. Every input will have one specific weight associated with it, and the network will perform a weighted sum. The inputs will be multiplied by their respective weights, and the results will be summed together to produce the output.

In our previous example, a weight of 7.56 was applied to the minutes input. Our new neural network will have additional weights for speed and mass, for a total of 3 weights. 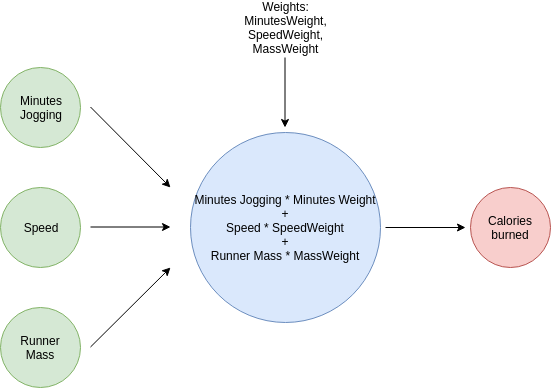 With mumbo-jumbo research, we discover that:

This is the Python version of our calorie-prediction neural network:

We can also write a short demo to demonstrate how to use it:

Wait a second, isn't that a dot product?

If you pay attention to the implementation of the multi-input neural network, you will notice that the weighted sum is a dot product between the inputs and the weights.

Now that you noticed, we can re-implement our multi-input neural network using the dot-product function we implemented before:

Note: In practice, you don't need to create your own implementations for the dot product or for neural networks. There are libraries with high-performance and well-tested implementations out there. Our implementations are meant to illustrate the principles, but creating your own machine learning library for production use is something you might not want to do just yet.

Previously, we learned how to combine multiple inputs with a vector of weights to create an estimate, something we can visualize as: 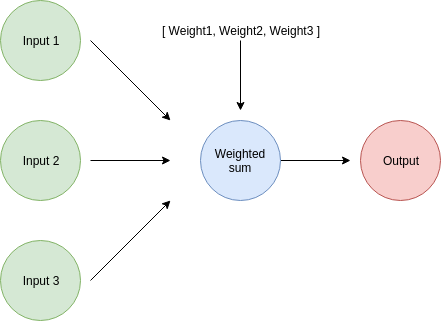 For estimating multiple outputs, we perform weighted sums with a different set of weights for every new output we need. Every prediction has its own associated vector of weights. For example, if we want to estimate 3 outputs, we need 3 sets of weights. 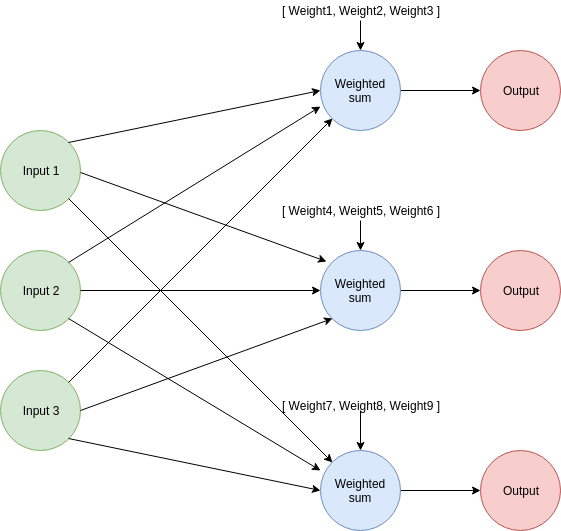 With this information, let's see how can we use this network to solve a practical problem. Suppose we want to use the info we already have to predict how many extra days I'll live thanks to my jogging sessions and how much money I'll save in medication, on top of the calories burned.

To summarize, our neural network now has: 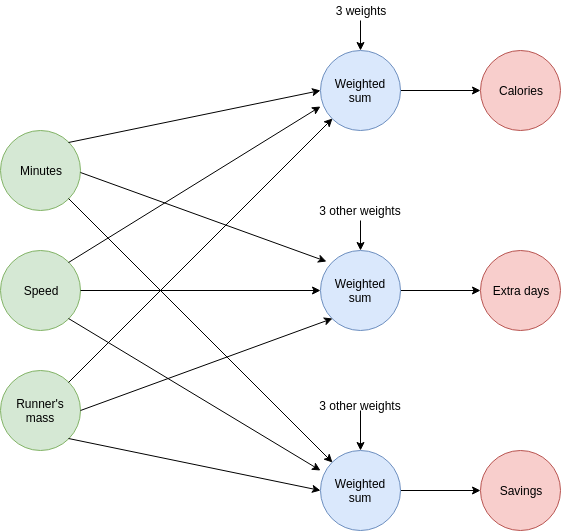 Three weighted sums will take place, one for each of the outputs. It may seem a bit complicated, but the implementation is straightforward once you understand what's going on.

Multiple input/output neural networks can seem a bit intimidating at first, but they are just extensions of things we already know. Most machine learning concepts are similar: at first, they seem complicated, but they are actually an amalgam of very simple underlying ideas.

I hope this article helped you understand neural networks with multiple inputs and outputs. Now that we know how the estimation process works, we can focus on learning the mechanisms networks use to tune the values of their weights.