As you might remember, supervised learning makes use of a training set to teach a model how to perform a task or predict a value (or values). It's also important to remember that this training data needs to be labeled with the expected result/right answer for every individual example in the set.

In projects that use supervised learning, some effort is required in the beginning to build a dataset with labeled examples. In practice, you will need to extract 3 subsets from this original labeled data: the training, validation and test sets. This is an important step for evaluating the performance of different models and the effect of hyperparameter tuning.

Despite being a fundamental topic, many early practitioners in data science find it a bit confusing. Understanding the usage and differences between the validation and test sets is important and doesn't require much effort.

So let's take a look at both how both sets are used to understand why we need them.

Validation and test sets, where do they come from?

Both sets are derived from your original labeled data. That data usually needs to be compiled from different sources across an organization and transformed into a structured format. This is a huge topic and the goal of the article is not to explore data mining techniques, so we will just assume that we have a dataset made of labeled examples.

Once you have the training data, you need to split it into three sets:

Good, it's time to see where each set is used.

The validation set and hyperparameter tuning

Different machine learning algorithms for training models have special values you can tweak before the learning process begins. These values are called hyperparameters and are used to configure the training process that will produce your models.

A basic example of a hyperparameter is the depth of a decision tree. A shallow tree (just a couple of levels) is a much simpler model and can only learn very basic relationships between inputs and outputs. Training is relatively simple and fast, and for a lot of applications, it's just enough.

A deeper tree can learn much more complex relationships and tackle harder problems, but training it takes longer and you are at risk of overfitting. 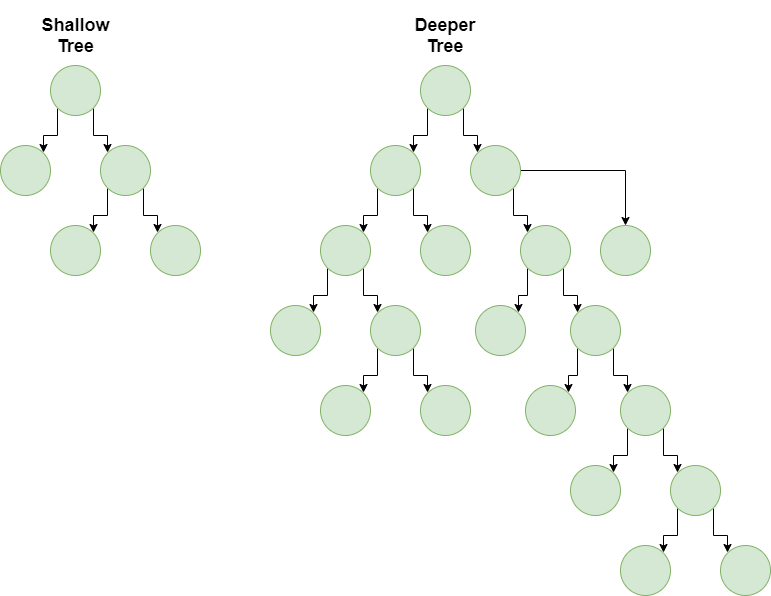 So, which hyperparameters produce the model that best performs on your data? This is hard or impossible to calculate using theoretical tools, so we opt for a much more hands-on approach: test different algorithm and hyperparameter configurations. For evaluating the performance we need data the model hasn't seen yet, so we use the validation set.

You will run your models on the validation set and see how different hyperparameter configurations perform. Based on the results, you will tweak them until the model performs well enough for the specific problem you are trying to solve.

It is also by comparing the results with the validation sets that you can notice overfitting, a topic we will explore in a future article.

After you are done tweaking hyperparameters and have a few promising models, it's time to run some final tests.

Evaluating performance on the test set

Your final tests need data your models haven't seen yet.

Ok, but we already have a validation set, why do we need another set?

This is important because some information from the validation set might leak into the models. This means that by tuning hyperparameters, you might be teaching some of the idiosyncrasies of the validation set to your models (things that are not part of the general data). You might end up with models that are over tweaked to perform great on the validation set but don't perform that well on real data.

That's why you need a test set: a collection of examples that don't form part of the training process and don't participate in model tuning. This set doesn't leak any information into your models, so you can safely use it to get an idea of how well the model will perform in production.

A test set lets you compare different models in an unbiased (or less biassed) way at the end of the training process. In other words, you can use the test set as a final confirmation of the predictive power of your model.

What happens if I don't have enough data?

Sometimes you don't have enough data to perform proper training/validation. You run the risk of not being able to properly train the model or having unreliable validation depending on the way you perform the split. In these scenarios, the best thing is to set aside some data for the test set and perform k-fold cross-validation.

In k-fold cross-validation, you will select k different subsets of data as validation sets and train k models on the remaining data. After that, you will evaluate the performance of the models and average their results. This technique is especially useful if you don't have that much data available for training. The following is an example when k equals 4. 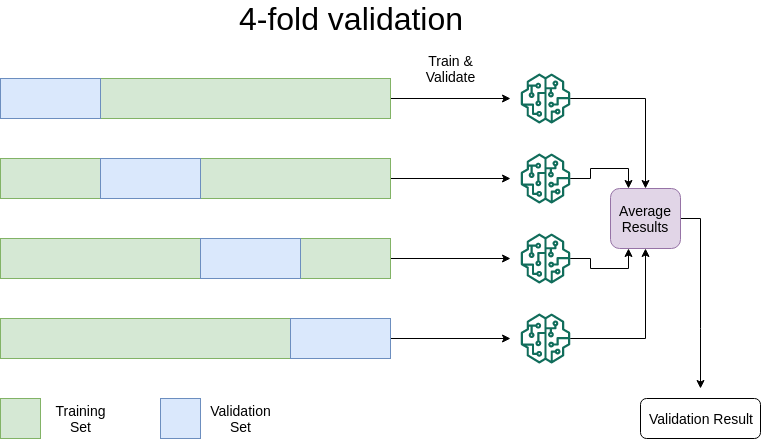 This has the advantage of offering you a better idea of the model's performance without needing lots of data. K-folds cross-validation is an extremely popular approach and usually works surprisingly well.

Knowing this stuff is important

In this article, we dealt with fundamental concepts for making a career in data science or machine learning. If you want to break into this field and start going to interviews, they'll likely ask you about validation/test sets.

Hopefully, after reading this article you'll be in much better shape to answer those questions.

Thank you for reading!

About Juan Orozco Villalobos
Budapest, Hungary
Hey there, I'm Juan. A programmer currently living in Budapest. I believe in well-engineered solutions, clean code and sharing knowledge. Thanks for reading, I hope you find my articles useful!
Previous Post : Overfitting, and what to do about it   Next Post : Precision vs Recall